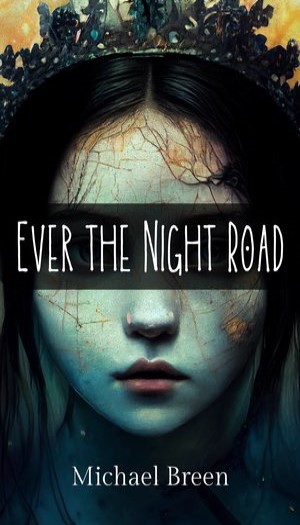 Ever the Night Road is a thrilling tale of adventure and self-discovery. Michael Breen introduces us to a vast magical universe filled with wonderous creatures and treasures lurking in deep waters. Perhaps the most enchanting aspect of the book is that it is on the threshold of childish naivety and worldliness.  Purchase here.

This is a story about the many forms of loss and the innate human need to fill the gaping void left behind. Dagny is an orphaned child who was taken in by her brother’s best friend and welcomed as a member of their family. She is raised on tales of exploration and discovery, daydreaming of her own adventures. On a day like any other, child’s play seamlessly transitioned into a fight for survival.

Join Dagny through her awakening to the dangers of the world. Amidst mystical creatures and phantasms, the most dangerous being is man. As Dagny explores abandoned lands, degenerate cities, and drowned worlds, she faces myriad dangers. While Ever the Night Road follows a group of teenagers and children, this is not a tale of mercy. The characters are exposed to palpable physical pain and suffering.

Michael Breen opens our eyes to the contagious quality of courage and the force of small acts of kindness. While strongly independent, Dagny taps into hidden powers when joining forces with her friends. It is these friendships and her small deeds of kindness that shelter her from the heavy dark veil of fatal danger.

This coming-of-age adventure story mesmerizes the reader on multiple levels. The story has a melodic rhythm for its unfolding. The author also takes his time to paint the atmosphere and the characters’ inner states and have the reader inhale these two worlds. Furthermore, Michael Breen shows great skill in character development. He explores the hidden motivations of individuals while factoring in the influence of external societal forces.

Ever the Night Road explores the mystical darkness of the human soul and the breaking of light as rays of hope and love pierce through the darkness. After peering into the magical realms, lively slums, and cheerful settlements outlined by the author, resisting the call of adventure becomes futile.