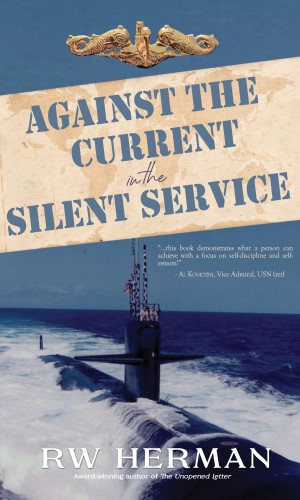 Against the Current in the Silent Service is a gripping memoir by R.W. Herman about navigating the uncharted waters of life. Through the pages of the book, the author takes a deep dive into his personal life while in the service of the Navy and his winding road of self-discovery.  Purchase Here.

While this memoir was written as a continuation of the author’s debut book, The Unopened Letter, it is well-rounded enough to stand as an independent read. This first book details the author’s experiences in the Navy during the Vietnam War Era, offering a peek behind the curtain of history from a uniquely personal perspective. Readers already familiar with the author’s life will finally know the answer to what happened next and why the author is called Commander. Those freshly introduced to R.W. Herman’s writing will discover an alluring and thrilling personal universe.

After building a reputation as an exceptional sailor (with an intriguing rebellious streak) R.W. Herman aims to become a commissioned officer. However, career advancement lies at the end of a winding road sprinkled with obstacles. To succeed, Herman must navigate the troubled waters of the system, inner struggles, and family life. At one point – which turns out to be a stepping stone for his dream future – the author is thrown into the foreign universe of submarine service.

Herman’s life story of trials and tribulations is an inspiring illustration of how hidden currents may guide our lives to the shores that we recognize as home. Also, his drive and ingenuity in thriving in adverse conditions keep the reader glued to the pages of his life. What is more, Herman skillfully decodes hostile conditions and uses the data and his knowledge as a world-building kit.

Readers might expect the setting for Against the Current in the Silent Service to be within rigid Navy and Marines confines. However, that is not the case. The story expands from within these systems touching on some of the great literary themes of love, loss, self-discovery, and freedom. The author interprets freedom as self-acceptance and allowing oneself the liberty to pursue the realization of a future self and a future us.

What is truly impressive about the read is the multiple levels of complexity that embrace the core story. The systematic exploration of social dynamics stands out as particularly relevant. Herman captures the fragile and subtle couple dynamics as two individuals jointly venture into a shared future. However, he also peers into the cracks of a seemingly rigid and stern system to uncover shifting and often unpredictable dynamics driven by a complex mixture of self-interest, duty, preservation, and sacrifice.

Against the Current in the Silent Service is an effortless read that can easily entrap readers into its flawless web of writing. While Herman displays an in-depth knowledge and understanding of the Navy and communication systems, his life story is not weighed down by technicalities. All that remains is to witness a most captivating life unfold in the pages of this book.