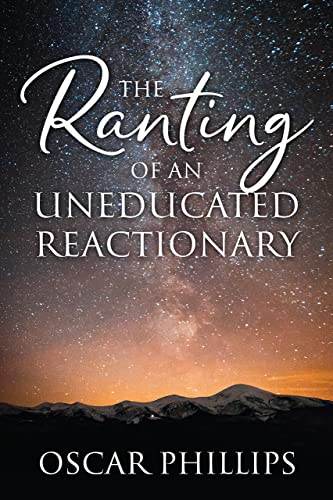 “The Ranting of an Uneducated Reactionary” is a remarkably ardent and precisely reasoned basal that examines the legislative and bureaucratic systems in modern-day America.  Click Here to Purchase.

Here, Phillips notes that conservatism is a movement for happiness, unity, and social justice with a positive agenda to fight poverty, promote equal opportunity, extol spiritual enlightenment, and help everyone lead happier and more fulfilling lives. He neatly hammers any idea that conservative ideologies lack relevance in today’s rapidly-changing world. As the chapters unfold, the writer presents his viewpoints with candor and precision, examining different structures of governance while not shying away from sharing his atypical assessments.

“The Ranting of an Uneducated Reactionary” is readable and consumable, well-written, and thought-provoking. Further, author’s command of facts is august. Having lived within a conservative environment, Phillips manages to bring lucidity to a subject that most analysts misperceive. While some of his beliefs on politics and socialism may appear contentious, his egalitarian approach to the various subjects that he discusses is what gives this book an elevated poise.

This volume offers a refined and enlightened presentation of what is singular about conservative social and political ideas. It is a compendium with an argument, that evokes pondering, reflection, and musing about the future of America and what part each American citizen can play to ameliorate living standards. Blunt and punchy in its own right, the text further suggests rejecting the values set by government socialists and returning to values that allow us to pursue life, liberty, and happiness. He further looks at areas of government, politics, society, and culture offering his insights on the same.

Overall, “The Rantings of an Uneducated Reactionary” is a must-read for anyone interested in the basic tenets upon which the United States was built, and most importantly, a rallying cry for all Americans. Indeed, Oscar J. Phillip’s forthright work is bound to serve as a rousing gallop for Americans and political science students alike. Its arresting viewpoints are worth a good read.