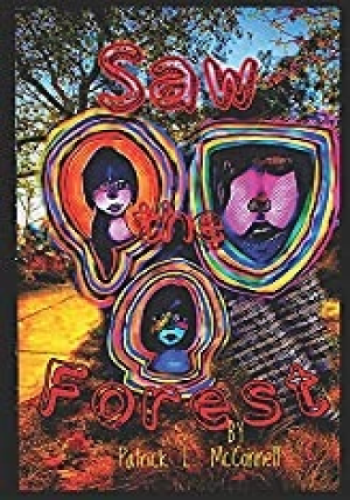 A read which keeps your heart as invested as your mind, Patrick L. McConnell’s Saw the Forest explores life through a multi-faceted lens, bringing attention to aspects of the human condition, wrapped in layers of emotion and motive through the experiences of life. Presented with a grove of eclectic characters, each on their own life’s journey but whose paths cross in dynamic and life-altering ways. Purchase Here.

A deft storyteller, author Patrick L. McConnell, captures the attention quickly with his literate narrative, which features a well-drawn cast of characters, each as interesting as the next to
meet, as well as somehow entangled within the same web of a diverse community collective. Moreover, the story divulges uniquely posed aspects of human nature, exemplified through the characters, inclusive of traits like love, bravado, religion, violence, as well as politics. Moreover, skillfully presented amidst relatable interactions which create an interwoven mosaic of human frailty and strengths, making exciting fuel for this evocative, character driven read.

Immediately, this literate, detail focused narrative brings into view the Right family; father, Artemus a doctor, Mother Taniaz, and their sons, Philip and Adam. The brothers are a unique pair, in that, younger brother Adam takes care of his elder brother Philip, who is considerably larger and stronger than him, but his mind is that of a child. As the family dynamic changes over time, after having lost both parents, the pair of brothers live humble lives as adults, still sharing a close bond. Adam, quietly stalwart, socially awkward, even reticent but well-meaning remains his brother’s faithful keeper who at times can become an unintentionally aggressive and intimidating handful.

Next, we meet Maryanne Whipple. She presents an intensely sympathetic character, and at age 24, she is attractive, and intelligent, but also scarred both physically and mentally. Additionally, having been recently released from service in the military, Maryanne bears a hard set life as she lives life from a wheelchair scarred from war and challenged with a mostly missing right leg and a damaged left, which makes finding a direction in life an uncertainty. And although she is somewhat shell shocked, albeit traumatized, she also harbors an empathetic nature as well as a brave heart.

As a matter of fact, each ensuing chapter adds further depth to the story with the addition of new characters, each being an intriguing inclusion to the story, adding another thread to the web of life especially when they intersect with the more prominent characters. Also meanwhile, an undercurrent of mystery flows throughout the story as machinations of characters and events occur via the receipt of mysterious emails coming to nun sister Alana Orrick, the context of which is often peculiar but also leads to life altering illumination.

All in all, I absolutely enjoyed Saw the Forest, by author Patrick L. McConnell. I am definitely a fan, especially after having read his previous work, The Gene Rasp. In particular, I find his style of writing, welcoming, entertaining and proficiently literate. He provides plenty of interesting action, characters, settings, and storylines. Additionally, his adept storytelling abilities escort you on a literary journey that is not only easily appealing, intricately detailed, and filled with intriguing personas, but also captures the imagination by virtue of the refreshing insertion of science fiction/fact-based elements. I definitely recommend this as well his other work as they are well worth the read and would make great movies.