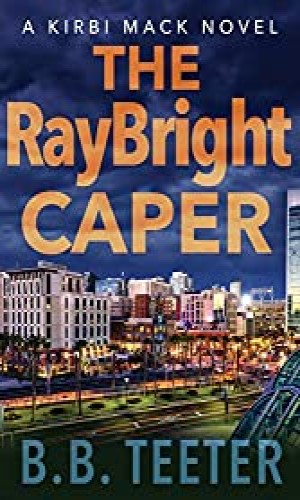 If you are looking to start a new modern detective series with a feminist twist, consider “The RayBright Caper” the debut novel of the “Kirby Mack Series.” The story revolves around the classic tale of thieves trying to pull off a heist and an underdog investigator trying to catch them. However, in B. B. Teeter’s version, this involves a secret military device as a prized possession, an unlikely band of two misfits, and an underappreciated female private security investigator. Purchase Here.

Harvey, the man who came up with the grand plan, recruits an unlikely associate, a tech-genius kid named Mark. The start of their professional relationship is a particularly enchanting part of the novel. The tension between the two is palpable, as they each try to size up the other without giving too much away about themselves. Nevertheless, to obtain trust, one must first offer trust.

The two make a great team by complementing each other nicely. There are plenty of moments where they show complete trust in one another. What is more, they seem fully dedicated to the plan. However, throughout the pages, there is a lingering tension, which erupts occasionally.

As their carefully thought-out plan is set in motion, so is Kirby Mack, who is playing for the other side. She is hired by the targeted RayBright Labs, a San Diego Defense contractor. The founders of the company catch on to the fact that something is about to happen but that something seems to elude them.
Kirby proves to be far more resourceful and skilled than her employers thought. Her intelligence and deep knowledge of human psychology enable her to see things in a different light and generally obtain what she wants. In the end, it might even turn out that she was too good for the job.

One of the most intriguing aspects of the novel is its triple narrative line. Chapters are alternatively dedicated to each of the three main characters, Harvey, Mark, and Kirby. This allows the reader a truly unique perspective on the unfolding events. It is truly fascinating to compare a singular event from multiple viewpoints as it brings into focus different details (which go unnoticed by the other participants). Therefore, the reader somehow rises above the events and has a wider view over and deeper understanding of the action.

“The RayBright Caper” promises to be a great read for adults who wish to go on a thrilling adventure. B. B. Teeter is masterful at giving the suspense momentum and also at keeping events unpredictable. These are just a few of the traits that make the book particularly hard to put down.