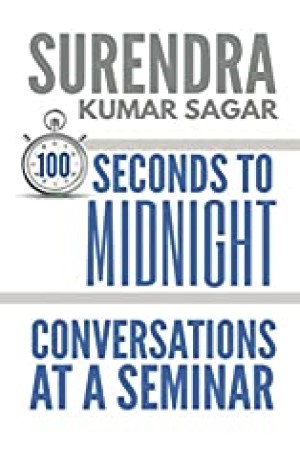 100 Seconds to Midnight:  Conversations at a Seminar is the latest intriguing and eye-opening book by the often prophetic and always interesting author, Surendra Kumar Sagar. The provocative title references the so-called Doomsday Clock and how close the hands of it have moved towards midnight, the time when Doomsday will supposedly happen and all of mankind will potentially perish. Purchase Here.

In 100 Seconds to Midnight, Sagar illustrates how close we have come to midnight and the roles he feels that the Trump administration and the Deep State have played in moving the hands ever closer to the fatal hour through a series of fictitious conversations held by Hollywood and Bollywood actors portraying famous dead intellectual personages such as Albert Einstein, Erwin Schrodinger, Leonardo Da Vinci, Diogenes of Alaska and himself, at a seminar. Though the topics and possible conclusions of the conversations at the seminar are, as the author calls them, “mind exercises,” they are meant to both enlighten the readers of 100 Seconds to Midnight and to urge them to get involved and do whatever they can to help ensure the continuation of intelligent life on Earth.

Kudos to the author for including the topic of COVID-19 in his book, and the ramifications the rampant spread of it and its variants, as well as the fatality rate of the virus, has had upon the entire world. The response that the countries of the world, and the somewhat initial delayed response of the United States, has pushed the hands of the Doomsday Clock somewhat closer to midnight, though it is heartening that vaccines have been invented to combat the disease, and that they are fairly effective against it.

Politically speaking, Surendra Kumar Sagar does not appear to take any side, as far as if he leans more towards Republican or Democrat points of view when it comes to who is more at fault in advancing the hands of the Doomsday Clock. Both sides are at fault, along with the Deep States and political leaders of the other countries of the world. What is more important than who is at fault is what can be done to reverse the trends and actions that have caused the hands to steadily approach Doomsday. While there are numerous disconcerting things that the fictitious versions of famous historical figures discuss in the seminar that Sagar depicts in 100 Seconds to Midnight, the author is not all gloom and doom. There is still a chance to reverse some of the deleterious trends and slow down the Doomsday Clock’s steady ticking towards midnight.

The very mention of the term “Deep State,” triggers something different in the minds of Republicans and Democrats in the United States. To Republicans, it often has the meaning that the Deep State are appointed and elected officials left behind from the Obama administration, officials who are controlling the government behind the scenes, even as President Donald Trump sought to rid the government of them and to do away with many of Obama’s policies and programs. To many Democrats, the idea that any such Deep State existed and still exists was a complete fabrication by Republicans, and Trump, concocted by them in an attempt to instill in the minds of voters the rather potent idea that there was/is a Shadow Government working against Trump, while he was in office, and the attempts of the Republicans, to make America great again.

The author of 100 Seconds to Midnight, however, has a different definition of what a Deep State is, in that he doesn’t write that it is a fabrication of any one political party. Instead, to his point of view, a Deep State is when politicians who are deeply rooted into governments of any country around the world are able to adversely influence actions, decisions, and policies of a country. So, for instance, Russia, China, the UK, and all other governments, have their own brands of “Deep States.” Each of these Deep States, according to the author, have their own agendas, and most of these aren’t always in the best interests of mankind, as a whole.

While I didn’t always agree with everything that I read in 100 Seconds to Midnight Conversations at a Seminar, that isn’t, of course, really moot to whether or not it’s a very interesting book that I’d recommend (which it is). I doubt that anyone who reads it will come away from the experience without having the worrying feeling that the hands of the Doomsday Clock are progressing all too rapidly towards midnight, though. That awareness is what Sagar would like to instill in the minds of his readers, as well as the knowledge that it is not too late to reverse the hands of the Doomsday Clock. If you’re interested in reading books that cause you to think and raise awareness in you about the potential direction the United States and the world is taking, I highly recommend that you check out !00 Seconds to Midnight Conversations at a Seminar by Surendra Kumar Sagar!