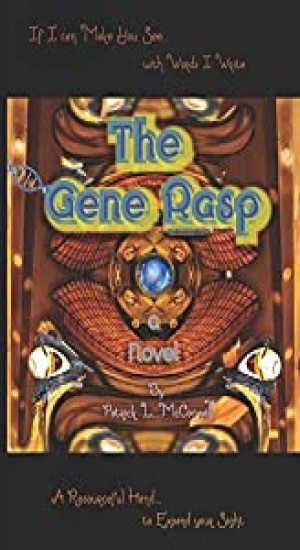 A noteworthy excursion into the world of science fiction, Patrick L. McConnell’s The Gene Rasp renders the heart and the mind rapt with its exploration of the heart and humanity through the journey of the inventor of a phenomenal life-altering device offering hope to mankind for a future utopia. Purchase Here.

Fascinating from its outset, the story takes place in the future, with the autobiography of the central character Tom Spoon later known as Dr. Tom Maloof due to be published in the year 2165. However this is no ordinary autobiography because Tom is no ordinary person; as a matter of fact, he becomes the savior of future humanity as he invents a revolutionary medical device called the Gene Rasp which can alter genetics of individuals offering cures for cancer as well as many other diseases thusly making the road to immortality a little clearer.

Easily engaging, the story captivates as Tom Spoon charms readers into his world with a humble and comfortable tone, drawing rich images as he reflects on his life, remembering people, relationships, and experiences which affected his journey from orphan to renowned doctor. He recounts having grown up in an orphanage of which we learn that life for Tom was lonely as a boy, although surrounded by many others, he was different, as he struggled with dyslexia. Believing his brain was broken but determined to overcome his affliction, he yearned to be both understood and connected to something, he began to write poetry, heartfelt masterpieces which appear interspersed throughout the story. Tom grows despite dyslexia going on to accomplish much with his life. He wins a woodworking contest at eighteen, attends college, and later graduate school. Altogether Tom’s journey culminates into a hopeful version of an immortal future.

Entirely a very likable read, The Gene Rasp garners the attention with an intelligent and richly woven journey through a science fiction narrative. I enjoyed author Patrick L. McConnell’s efforts within this work as he successfully brought forth a story that was simultaneously thought-provoking and touching. In particular, I appreciated the refreshing inclusion of intermittent QR code scanning tags and URL links as well as the inclusion of the end of the screenplay for the movie version, all served well to enhance the reading experience by creating deeper interaction with the reader. Also personally, I think this would make a great movie and I look forward to more works by author McConnell. This is a read definitely worth adding to your science fiction collection.