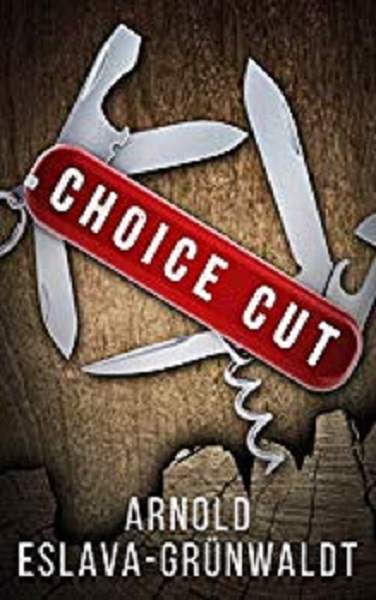 Book three in his penetrating “Cut” series, Choice Cut by author Arnold Eslava-Grünwaldt dispenses to readers yet another fast-paced, and intensely exciting addition to his well-received crime thriller series, within which, he capably continues to delve into the activities of the criminally debauched in Yonkers, New York, and the skilled team of detectives that pursue them and bring them to justice. Purchase Here.

Maintaining the pace of excitement, drama, and thrills author Grünwaldt artfully continues the general storyline from book two, populated with most of the same characters, particularly the resilient and tough, Detective Sergeant Hamilcar Hitchcock and members of his general assignment squad. With a challenging mystery brewing, the story moves quickly and flawlessly into new and twisted scenarios calling for Sergeant Hitchcock and his team to move into action.

This time, the story starts out with members of the general assignment squad finding themselves coming to terms with the end result of their previous investigation which led to the nearly fatal shooting of a revered fellow officer and the unfortunate and temporary loss of another valued officer. However, the thrills and twists are just beginning with the discovery of a recently deceased male who may possibly be the casualty of a serial killer known as “The Butcher” whose victims are referred to as “one of the butcher’s cuts.”

Meanwhile, the mystery intensifies when somewhere in a hospital bed artist Jerome Samuels dies holding onto the knowledge of a dark secret from his past, one brimming with regret and betrayal. Initially famous for his tattoo art, Jerome Samuels leaves behind hints of his secreted past within his artwork. Specifically, his tattoos leave indelible hints to his grimy past and a well-endowed stash. Also, leaving behind two ne’er do well sons, Paske Samuels and half-brother Ben-Moon Wallis, the two scheme on finding the clues to their maligned father’s hidden treasure. Moreover, unbeknownst to them, they are not the only ones looking for clues to Samuels’ stash. Someone else has their eye on that same prize and lurks in the shadows willing to go to great lengths to get what they want and murder is no exception.

Ultimately, as criminal elements cross paths, the excitement continues to build within the story as the butcher’s presence in Westchester becomes an increasing terror making for an intense race against time and crime for Detective Sergeant Hitchcock and his team to unravel this web of evil and greed.

Essentially, I really enjoyed Choice Cut, by author Arnold Eslava-Grünwaldt. In fact, I have enjoyed the other books in the series as well. Each book so far has turned out to be a fascinating, multi-perspective mystery, populated with great characterizations, especially Detective Sergeant Hamilcar Hitchcock. Overall, the story rages with clever literary twists and turns that take you deep into the heart of darkness, the mind of a killer, and into the backstory of the heroic detectives that do the really hard work. Consequently, this book as well as his others, are worthy reads that I personally think would make a great TV series or movie.