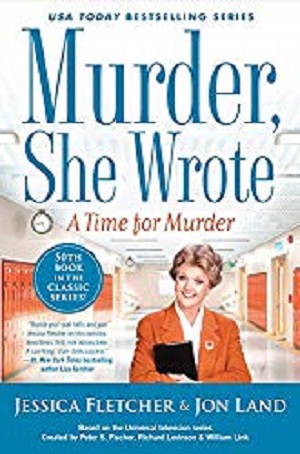 “It’s just that the research I did turned up a murder where you used to live, where you were an English teacher.”
“There was a murder, and someone was arrested, yes, Kristi.”
“Were you the one who caught him, Mrs. Fletcher?” Purchase Here.

That exchange, between Jessica Fletcher and a young woman she thinks is a reporter from the local high school newspaper, forms the heart of A Time for Murder, the 50th entry in the iconic Murder, She Wrote series. Jon Land, current series shepherd, has chosen to celebrate that milestone by taking us where no reader (or viewer, for that matter) has ever gone before: into Jessica’s past, specifically twenty-five years back in time, and the result is nothing short of a smashing, slam-dunk success unrivalled in the annuls of literary pop culture.

Jessica’s still married to a much alive husband Frank. And they’re raising their eight-year-old nephew Grady at the time, as she tries to carve out a career as a high school English teacher while struggling to get published.

“Is this a mystery?” one of her students asks, as the class dissects one of Jessica’s own short stories that she distributed anonymously.

It’s not supposed to be, but that gets her thinking, as does the murder of the beloved high school principal who was just about to hire her full-time. An office mishap is suspected at first, until Jessica displays her keen powers of observation for the first time while working with Appleton Maine’s only detective, none other than future Cabot Cove sheriff Amos Tupper.

But that flashback to the past is only part of Land’s fourth, and best, effort in the series so far. In the present, the high school reporter for whom Jessica granted an interview turns out not to be a reporter at all; in fact, she’s not even in high school. And when she turns up murdered herself after badgering Jessica about that murder in neighboring Appleton, we’re off to the races on a dead sprint that swiftly reveals a clear connection between these two killings separated by twenty-five years.