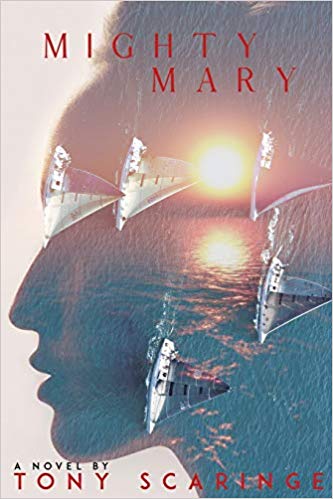 Mighty Mary is a fascinating work of fiction, based on real-life events, that encompasses the sport of international yacht racing and the first all-women’s team to vie for the America’s Cup in 1995. Tony Scaringe expertly portrays the obstacles faced by the women who were breaking new ground by competing in a male dominated sport. Readers gain an inside perspective into the concerted undertaking and unwavering commitment necessary in order for this momentous event to take place. Purchase here.

The prologue, chapter and section headings, and epilogue are integral to the storyline. The prologue provides readers with a brief history of the America’s Cup and introduces Dan Cook, the motivator behind the establishment of the women’s team. Interviews with Cook are skillfully interwoven into this story that exemplifies a noteworthy occasion in history. The chapter headings, as well as section headings within chapters, do not interrupt the flow of the story. Specifically, the headings are an invaluable source of information by giving readers each chapter’s theme, along with making it easy to follow changes in locations, events, and timeframes. The epilogue includes uplifting and appreciative comments in recognition of not only the women’s team but also their advocates. Moreover, these remarks are made by men who are instrumental in changing the perception of women’s ability to compete against men in yacht racing. In addition, the epilogue includes a meeting with the press in 1995. This encounter brings into question whether or not a man may have negatively affected a key performance.

Scaringe has done a remarkable job of illustrating the courage, sacrifice, perseverance, and dedication of the women’s team in spite of the issues they faced. For instance, some of the concerns were prejudiced views toward women’s involvement in what was considered to be a “man’s sport,” stress in relationships due to time commitment, disappointments in race outcomes, and life-threatening experiences during sailing races. Marvelous portrayals of well-rounded characters, scenes brought to life by vivid descriptions, and wonderfully dramatized conflicts both between man and nature increase the enjoyment of this novel.

Mighty Mary is a well-written and superbly researched, heartening story of the strength of human resilience. Readers are also provided with an excellent bibliography of books and articles for anyone interested in more information about the America’s Cup all-women’s team, their public launching into America’s Cup sailing, and the events that transpired in which women were given an opportunity to try and prove they could effectively compete on par with men at the top level of an international sport.