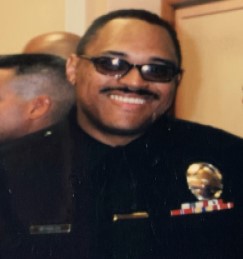 The books shown on the left are by FREDERICK DOUGLASS REYNOLDS. Click on the cover to order.

This interview was conducted by Timea Barabas on March 21, 2022.

Timea Barabas: Thank you for participating in this interview! After reading “Black, White, and Gray All Over: A Black Man’s Odyssey in Life and Law Enforcement” I am intrigued to have this open discussion and dive deeper into the pages of a modern odyssey.

Writing a memoir seems like a daunting task. In my opinion, one of the reasons that made “Black, White, and Gray All Over” such a memorable read was its raw honesty. What motivated you to start this project? And what kept you going until you crossed the finish line?

Frederick Douglass Reynolds: The murders of my colleagues in 1993 was certainly one of the biggest motivators. But while I was working, I just couldn’t find the time to write a book. I was immersed in my job and family at the time. I worked homicides for the majority of my career, and obviously, that took up a lot of time and energy. When I retired, I started writing here and there, but I still wasn’t fully committed. My whole life perspective changed in 2020, though. In addition to this life-altering, social and culture transition we are currently going through, which started in earnest that year. I had a heart attack and almost died. After a successful surgery, I lay in my bed, alone in my room because visitors weren’t allowed, just me and my thoughts. I realized that I had almost died before I had chance to finish this book. Was there some sort of divine intervention to push me to the brink so that I would be spurred to complete it? All kinds of thoughts go through your mind when you are alone contemplating your existentialism. When I recovered, I began writing with a sense of urgency I did not have before. I dedicated the book to my father, and had it published on the anniversary of his death.

Timea Barabas: Who are some of the minds who shaped your views and literary style?

Frederick Douglass Reynolds: I love Edgar Allan Poe. I also love Robert Beck, Elmore Leonard, and Walter Mosley. Poe is a masterful storyteller and is considered the father of the detective novel. Leonard and Mosley write with raw determination so real you almost feel you are in each scene and know each character. Robert Beck, more widely known as “Iceberg Slim”, was a pimp in Chicago. Despite his shortcomings in that arena, he was a brilliant writer who was able to draw on his personal experiences to write books that are considered modern-day classics.

Timea Barabas: The title of the book is certainly gripping. Tell us more about its role and if there is any special significance behind it?

Frederick Douglass Reynolds: Yes, there is. Its funny, because I had the title for the book years and years before I really decided to write this book, telling myself, ‘If I ever write a book, that’s going to be the title.’ I chose this title because my life has always been about straddling that line between good and evil, right and wrong, and black and white. I could never quite get to one side, and the other side I definitely didn’t want to get to at all. So, I stayed in the gray area. And this thought-process were never truer than when I became a cop. The law-enforcement profession is riddled with black and white, but I found comfort in the gray area; the area where I didn’t have to take someone’s freedom because they were trying to feed their child and got caught stealing food, the area where I knew that sometimes, doing the wrong thing for the right reason was the right thing to do. So, I wasn’t a crook which would have put me in the black area, and I wasn’t an inflexible, uncompromising foot soldier, which would have put me in the “white” area.

Timea Barabas: I am personally intrigued by the work ethic and practices of writers. Hemingway would start writing at first light, while Stephen King declared being fueled by tea while writing, to mention just a few. Do you have a special writing process?

Frederick Douglass Reynolds: Whenever I can’t sleep, I will get out of bed and sit in my backyard with a cup of coffee and my laptop. It doesn’t matter what time it is, either. I just start banging on the keyboard, letting whatever there is on my mind flow outwards. The more I type, the more what I’m typing starts to become a story. That is the was I started my second book, which I’m currently working on.

Timea Barabas: I also had the opportunity of writing an honest review for “Black, White, and Gray All Over” and one of the biggest challenges I faced was trying to embrace the book’s complexity. There are so many dimensions (the numerous situations and hurdles you encountered throughout your personal and professional life), yet it is all neatly folded within the pages of the memoir. How did you manage to reign in the many out-branching topics?

Frederick Douglass Reynolds: I started the book writing about the murders of two of my colleagues. That was a seminal moment in not just my career, but my life. It just grew from there; I cried quite openly several times as I wrote and then it occurred to me that I was crying about long suppressed issues in my personal life and upbringing. I realized that although I had dealt with a great deal of trauma, my life overall was inspirational and I wanted to share it and by doing so, I was able to exorcise a tremendous amount of demons. Once I discovered this, the book basically wrote itself. It became my own little fairy-tale with moments of frog-kissing and battles with dragons.

Timea Barabas: The topic of race is foreshadowed in the title of the book itself. Yet, while your writing does touch on the subject, it expands far beyond the concept. How would you position this subject in the larger context of your book?

Frederick Douglass Reynolds: I quest for unity and equality. Freedom for all, and not what is written in a yellowing document in the Library of Congress, but tangible freedom, where we all share the belief that if I get a job or position it is not because I am Black, or female, gay, but because I am the right person for the job. To give someone a job for the same reason you would deny them that same position is not freedom, or equality. It is window-dressing for another form of discrimination. We are all the same. The word love has got to be used more, and there has got to be some weight behind it. How many times was that word used by the founding fathers, even though it is the single most important thing we as humans have?

Timea Barabas: One of the lessons that struck me most while reading your story was the power of good deeds, no matter how small. Yet, these are not such a common occurrence as they could (and should) be. How would you motivate people to engage in more positive actions?

Frederick Douglass Reynolds: Always treat people the way you would expect to be treated. Talk to people the way you expect to be spoken to. Some of the most successful police officers I ever worked with knew how to do this and were able to avoid numerous confrontations over their respective careers. Go about life wanting to be the kind of person someone you can’t even remember remembers you because of a kindness you showed them years before. I have had situations where people approach me and thank me for something I did for them, and I am embarrassed because I can’t remember who they are even if I can still remember the deed.

Timea Barabas: As a guardian of civilians fighting the many incarnations of evil throughout your career, what advice would you share with others for protecting themselves and their family or community?

Frederick Douglass Reynolds: Live your life to the fullest. Death is a necessary part of it, so we cannot go about living transfixed with fear because of it. But we have to protect ourselves. It is an innate part of who we are. Don’t seek out conflict. And if the odds aren’t in your favor, its okay to outright avoid it. If you are backed into a corner, however, never give up. One of my favorite movie lines is from “Gladiator” starring Russell Crowe: “What we do in life echoes in eternity.”

Timea Barabas: Nature vs. Nurture is an age-old debate. Where do you stand on the issue?

Frederick Douglass Reynolds: That is a very complex issue, but I believe that it is a mixture of the two. During my time as a cop, I saw kids who grew up in the same household under the same conditions turn out totally different. One became a successful attorney, and one went to prison for murder. I believe that we are all capable of horrible, horrible things under the right conditions. Certainly, the conditions in which one is raised can exacerbate underlying aggressions, or they can mitigate them. But sometimes, like the situation with the two brothers who went in different directions in life, things just cannot be explained. Do I believe Jeffrey Dahmer would have turned out the way he did if he was raised on The Cosby Show? Maybe. Maybe not. There will always be good and evil. However Supreme evil has got to have the proper breeding ground for it to manifest itself to the extent of a Jeffrey Dahmer. Otherwise, maybe he just becomes someone no one wants to invite to any parties because he has a foul personality instead of his becoming am actual monster.

Timea Barabas: As someone who has faced adversity (under many forms) and repeatedly overcame it, what advice can you share with others who are currently struggling?

Frederick Douglass Reynolds: Never quit. Ever. No matter how many times you fall down, get up at least one more time.

Timea Barabas: Following the positive reception of “Black, White, and Gray All Over: A Black Man’s Odyssey in Life and Law Enforcement,” do you have any future projects in mind?

Frederick Douglass Reynolds: I do, as a matter of fact. There is evil in this world, and monsters walk among us. Oftentimes they smile and sit right next to us in the coffee shop while we go on about our sometime mundane existences, never realizing that we might be potential prey for one of those monsters. I have met some of them during my lifetime. I want to write about it.

Timea Barabas: Thank you for your time and candid answers! I am honored to have had the opportunity to voice my questions and learn more about your life and literary work. Looking forward to what is to come!