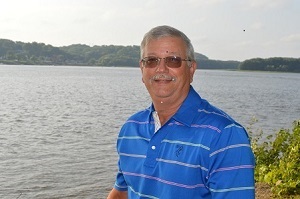 The books shown on the left are by T.L. Hoch. Click on the cover to order.

This interview was conducted byTeri Davis on February 18, 2013.

T.L. Hoch is our guest today, and I’m pleased he’s agreed to this interview in which you’ll learn more about Tom and his book, Chasing Normal.

Teri Davis: Was there a real student who inspired your creation of Annie Smith?

T.L. Hoch: I did not have a particular student or athlete in mind when I created Annie’s character. The best player I ever had was an all-state center, and so far, the center on the Lady Eagles plays a minor role.

Teri Davis: Where did you learn about basketball skills and the strategies mentioned in the book?

T.L. Hoch: Like a lot of guys, sports were a huge part of my early years. I have played, officiated and coached basketball, so it’s obviously one of my favorites. I picked up a lot of good things along the way from all three of the above areas. Appreciating the game for all the positives it can generate might make me old fashioned, but I don’t think that’s a bad thing. Today, it often seems that putting on a show is just as important as the actual playing of the game. I understand that things will always change, but that doesn’t mean they will change for the better.

Teri Davis: Obviously, you have seen many poor examples of sportsmanship over the years. What do you think could change the sport?

T.L. Hoch: Parents and coaches — in that order. They both need to teach and model the proper behavior to young people. In my opinion, I believe we need to hold our young athletes to a higher standard and not look the other way just because someone can run faster or jump higher than the average player. I saw a t-shirt recently that said, It’s not bragging if you can back it up. Bragging is bragging anyway you look at it—and it’s annoying. I believe in the old saying, “If you’re good, you don’t need to talk about yourself — leave that to others.”

Teri Davis: As basketball players, you mentioned Larry Bird and Magic Johnson. Are there others that you admire as examples of skilled athletic ability and sportsmanship?

T.L. Hoch: I mentioned Roger Maris in Chasing Normal, because I have always admired him and feel that he got a bad rap from the press. Christy Mathewson, New York Giant pitcher in the early 1900’s, was considered one of America’s finest athletes in ability and character. Luke writes about him in the second book. The third book, where the girls go to a summer camp, will mention Dot Richardson, the famous softball player from Texas.

Teri Davis: Besides the sportsmanship, you mention the personal responsibility such as helping the neighbors and picking up litter. How do you change people for the better?

T.L. Hoch: You’ve got to show young people as well as tell them. It’s a shallow message if you don’t back up your message with action. Young people are always watching adults and I believe our actions go a long way in shaping their behavior.

Teri Davis: Obviously, B.A. will be playing softball in the next book, Tammi’s strong sport, and the rivalry will continue. Do you have long range plans for B.A.?

T.L. Hoch: I am planning a five book series, so the answer is yes. However, Chip is the main character in the second book, Discovering Balance. I didn’t plan it that way in the beginning, but it seemed the logical thing to do. She is definitely a “free spirit” and I have received a lot of positive feedback on her. I’ll admit, her character is probably the easiest for me to write.

Teri Davis: What personal experiences both in your childhood and as a parent influenced this story?

T.L. Hoch: Some of the events in the first two books were actually taken from personal experiences. For example, when Chip winks at the opposing coach and he runs out onto the floor. That was an actual incident while I was playing in junior high, except my teammate blew a kiss at the coach. I didn’t think blowing a kiss was appropriate, so I changed it to a wink. The rest of the incident was pretty much the way I remembered it.

Teri Davis: Texas is known as one of the states with parents who become obsessed with sports. Why did you choose Arkansas and Texas as the setting?

T.L. Hoch: I chose Texas because my brother lives there. The town of Reston is actually the town that he lives in. I won’t say the name of the town, but I think the residents can figure it out. I left several clues throughout the book.

Teri Davis: Which authors do you suggest for young adults to read?

T.L. Hoch: I’ll have to admit that I read very little YA fiction. I know this sounds strange coming from a YA author. For sci-fi, fantasy, I recommend Patrick Rothfuss. I thought his first two books were awesome, and so did several of my high school students. I’m told that Suzanne Collins and Veronica Roth are terrific writers. Margaret Haddix and Louis Sachar also come to mind.

Teri Davis: How do you suggest we begin to instill classy behavior and personal responsibility in our children and community?

T.L. Hoch: Putting it at or near the top of our priority list would be a start. When I was teaching I had my students write on “what class or what honor means to me.” It was obvious, after reading their papers, that some of them had not talked about these two subjects with their parents. A person’s honor is possibly the most valuable thing they possess. It’s what makes you a quality person. On the other hand, a person without honor, is just plain sad. Once again, when adults model decent behavior, a lot of young people will follow suit. They need to be shown what class is really all about. If they don’t see it in the adults that they are around most of the time, and this includes their teachers, it’s hard for them to figure out what is classy and what isn’t.

Teri Davis: Thank you Tom for taking the time to do this interview for Bestsellersworld.com.