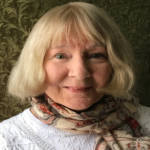 The books shown on the left are by Barry Spivack and Patricia Saunders. Click on the cover to order.

This interview was conducted by Timea Barabas on June 7, 2021.

Timea Barabas: An Antidote to Violence: Evaluating the Evidence is a monumental book. As a Psychology student and now a Sociology Ph.D. candidate, I feel that I can slightly grasp the amount of work that went into creating this project. What was the spark that started it all? What about the fuel that kept your research and writing going?

Patricia Saunders: Great question. Barry and I have both been interested in the influence of Transcendental Meditation on the collective consciousness of a group or a nation since we first heard about it. We have both participated in research in the sense we have been part of large peace-creating groups practicing the Transcendental Meditation technique in different countries and different continents and have seen firsthand its power to reduce violence and crime in any given area.

Timea Barabas: Despite a continually growing body of scientific literature on the beneficial effects of TM, there is still often great resistance on both an individual and collective level. Where do you believe this stems from, and is there a way around it?

Patricia Saunders: I can answer this through the eyes of a Harvard PhD researcher who sent a copy of one of the studies, the International Peace Project in the Middle East (IPPME), to academic peer reviewers, journalists, government representatives, think tank members, and diplomats, all of whom were experts on the Middle East. She then carried out a series of personal interviews and received several answers, ranging from the idea that politics is an art not a science, and that scientific solutions are irrelevant to diplomacy. The answers revealed the predominant reasons preventing government officials and academics from accepting the results even though they had been published in an academically prestigious journal –The Journal of Conflict Resolution.

Policy makers do not give serious consideration to research based on a new paradigm for resolving international conflict, so…….

These responses are challenging but are not unique to research on the Maharishi Effect. Academic reviewers are keener to publish articles that correspond to their own theoretical preconceptions or can be explained in a way that fit their beliefs. They are wary of articles that are theoretically challenging to them. I do think the way around the challenges is to continue introducing academics etc to the research and also try other forms of research. One such form might be to measure biochemical changes in individuals living near a peace-creating group. That would not be too expensive or too difficult to organize.

Timea Barabas: Although An Antidote to Violence: Evaluating the Evidence has a strong scientific approach to the subject, the data is presented in an easily accessible language. Also, you delve into history, politics, and several other fields throughout the book. How would you best define your approach? What should readers expect?

Patricia Saunders: Well, our approach is based on hard evidence for the premise based on peer-reviewed published research. There is a lot of anecdotal evidence for the influence of Transcendental Meditation on society as a whole, but we largely ignored this because we wanted to inspire scientists to investigate collective consciousness and examine the research. I don’t think they would respond as well to anecdotal evidence as they would to published research. Of course, we also wanted to make it readable and so we looked for similarities in politics, sociology, physics, and psychology, things that might explain the mechanics.

Timea Barabas: One of the most interesting aspects for me, was the merger of Transcendental Meditation (TM) with education and actually morphing into a pedagogical style, making self-awareness and knowledge part of the curriculum. During my Bachelor’s Degree I had the wonderful opportunity to follow a course on Transpersonal Psychology for a semester, but that was my only experience of the sort in the academic education system. What is your opinion on the future of education? Is there a paradigm shift in sight?

Patricia Saunders: There certainly is. Education needs to emphasize the importance of gaining self-knowledge for personal fulfillment and understanding deeper levels of objective reality. It also needs to involve students in the learning process. Often, this means that different students have different ways of learning, and these differences must be considered in the classroom. The role of the teacher becomes one that stimulates diverse learning conditions that support active learning. To help introduce these ideas into the school curriculum, we look to the pioneering work of the David Lynch Foundation, particularly its educational outreach, the Quiet Time program (QT), which is a practical evidence-based approach that reduces stress while improving focus, academic performance, student wellness, and the general school environment. It introduces two periods of TM each day to help balance student’s lives and improve their readiness to learn. It doesn’t challenge existing existing educational strategies but complements them by improving the physiological underpinnings of learning and behavior.

Timea Barabas: How would you define your target audience? And would you recommend the book to supporters and skeptics equally?

Patricia Saunders: Our target audience is anyone who is open-minded and interested in the idea that creating coherence in collective consciousness can result in improvements in the quality of life in society, increased governmental success and international cooperation without the use of armed force. The book was written with skeptics in mind. That was another reason why we stuck to peer-reviewed published research. Skeptics may not believe the results, but they have difficulty arguing with the data. It is too convincing.

Timea Barabas: What is the ideal reaction and after-effect you would expect from readers?

Patricia Saunders: This would be a reader who says “wow, this is fantastic. I am going to encourage everyone I think might be interested to do more research on it. Then I will take the research to the government or any wealthy individual who might like to support a peace-creating group. I will also send copies of the findings to every media outlet there is.”

Timea Barabas: I found it quite intriguing how two people with different trainings and backgrounds, joined forces to tackle a common subject of interest. Tell us more about your specific skill set for this project and how these might have complemented or completed each other?

Patricia Saunders: Okay. So, Barry and I are two different people who share a desire for peace in the world and a desire for a better quality of life for everyone. Barry has the analytical mind. He loves data, statistics, politics, and sociology. I (Patricia) am the one who searched for ways to make the data, the facts, and the figures readable. We complemented each other like this, and occasionally, we crossed over. I would find some new evidence and Barry would find an interesting analogy. But in general, we stayed within our own areas of expertise. There was no time for competition. The need to create peace was always the primary goal.

Timea Barabas: Also, how did TM become part of your life, and what role does it currently have?

Timea Barabas: How would you measure the success of An Antidote to Violence: Evaluating the Evidence?

Patricia Saunders: If the book influences decision-makers in society — those who have the power to create genuine change — and persuades them to take action and implement a peace-creating group in their respective areas or countries, the book will have been successful. The Maharishi Effect doesn’t undermine the work of other organizations; it increases their success by creating positive conditions that help traditional methods. We are not taking anything away, but only adding on to strategies that are already in place.

Timea Barabas: Do you have future projects on the horizon that you would like to share with us at this point? Also, please share how those interested can stay connected with you and up to date with ongoing research on TM.

Patricia Saunders: At present, Covid has put a stop to research and forced us to review the way the Maharishi Effect is measured in the future. As I said earlier, maybe smaller experiments such as measuring biochemical changes in individuals could be carried out. This has already happened. Increases in EEG brainwave coherence between meditating subjects 1170 miles away from a peace-creating group have been measured. Changes in the size of a similar group (average size 1400) were a significant predictor of overnight excretions of the serotonin metabolite 5-HIAA in people not practicing TM who were living and working up to 20 miles from a group were also measured. More research of this kind could be done, and updates can be found on the website An Antidote to Violence

Timea Barabas: Thank you Patricia Saunders and Barry Spivack for doing this interview with me! It was an honor for me, and I hope that it will also attract many more readers to checking out An Antidote to Violence: Evaluating the Evidence.