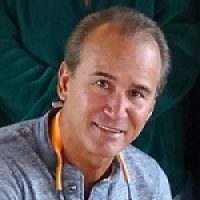 The books shown on the left are by Rob Kortus. Click on the cover to order.

This interview was conducted by Suzanne Odom on September 12, 2019.

Rob Kortus has graciously agreed to be interviewed by me, and I hope you all like reading this interview as much as I enjoyed interviewing him. Without any further ado, let’s get on to the questions!

Suzanne: What inspired you to write a book using your dogs as the main characters? (“When Dog Pals Fly Across America”)

Rob Kortus: The inspiration to use my dogs as the main characters is actually pretty simple. I want to create a legacy for my dogs. Sophie, Sulley, and Wallace cannot do this on their own. Just like you and I, we will leave a legacy behind for those who know us. I love my dogs dearly and to write a book turning them into cartoon talking dogs flying a helicopter and educating readers creates this legacy and in part will hopefully touch the hearts of both children and adults who hold this book in their hands and gaze down seeing these dog pals journey across the USA page after page.

Suzanne: How do you come up with a book story?

Rob Kortus: I come up with a book story simply by brainstorming and then build upon the idea. With my background as a helicopter pilot and dog trainer it wasn’t difficult to generate the idea of my canine companions flying in a helicopter. The question was, where? Since it was going to be a children’s picture book, I focused on having the content to be educational and interesting. Instead of the flight crew stopping at known major attractions in each state, I wanted to create something a little more outside of the box (if you will) and researched the less visited venues in each state with many being unique as you witness in the book. This perhaps creates the urge to dive deeper into the states to see what other venues might be interesting to research and visit. I have found thus far from reviews that not only do children like the book but also adults are finding it very appealing. What readers may also find interesting in the book is why I used various colors on the helicopter, the color of the dog’s scarves, and who other characters in the book are to include people and other dogs. These answers are in my blog “Author Tells: Book Insight series.”

Suzanne: When did you become interested in learning to fly?

Rob Kortus: It wasn’t until my high school senior year I found some interest in flying. I decided to join the Army and after taking the entrance test which revealed what jobs I qualified for, I chose to become a helicopter crew chief. After several years of turning wrenches and flying in the backseat of the helicopter, I decided I wanted to become a pilot. After I submitted my first application for flight school, I was told they had too many applicants at that time so I had to exhibit patience until the next selection process. In less than a year, I received a call asking if I wanted to attend the Warrant Officer Candidate Development course to fly Blackhawk helicopters. I started the course in February of 1984 and graduated the following December. After five years as an enlisted man and five years of being a warrant officer, I transitioned over to the Coast Guard flying their helicopters and received my commission. So, ten years with the Army and 17 plus years with the Coast Guard, I retired as a Commander.

Suzanne: Have you visited every state in the country?

Rob Kortus: I think visiting every state is a bucket list for a lot of people, but I have not. Now that you ask that question, let me count how many I have visited…35 states. With that said, some of the states I visited I never stepped foot in. How is that you might ask? I flew a Coast Guard helicopter from Elizabeth City, North Carolina all the way to Sitka, Alaska. To see our beautiful country from several hundred feet from the air was absolutely incredible! The crew and I saw antelope, coyote, wild horses, sea lions, bald eagles, mountain goats, etc. I fly fished in Montana and sat with real cowboys in a steak restaurant. Flew over the majestic Cascade and beautiful Rocky Mountains. Simply stated, a trip of a lifetime! For those curious about the flight route and duration, here it is: North Carolina, Virginia, Kentucky, Indiana, Illinois, Missouri, Kansas, Colorado, Wyoming, Montana, Idaho, Washington, Vancouver, Sandspit British Columbia, Alaska. Entire flight duration was six days averaging 4-6 hours of flight time each day.

Suzanne: In your writing, do you try to be more original or to deliver to readers what they want?

Rob Kortus: I will have to say that I try to cover both but probably lean towards being more original. I want to capture the readers attention and try to maintain that attention throughout the manuscript. I want the reader to feel like they are there actually in the scene and to feel the emotion of the visual picture I am painting for them.

Suzanne: Describe what your ideal writing space looks like.

Rob Kortus: Interesting that you ask that question. Several years ago, the bulk of my writing took place on an Airbnb boat docked in Charleston, SC. I stayed on the vessel ‘Vintage,” a beautiful 1968 Grand Banks yacht-class trawler. I desired some quality quiet time and this was a cool place to focus on the book content. I managed to get a lot of research and writing done on the When Dog Pals Fly Across America manuscript over several days on the vessel. I even had the time to have a fellow Coast Guard rescue swimmer visit me on the boat and we reminisced on many of our helicopter missions.

Suzanne: What does literary success look like to you?

Rob Kortus: For me, literary success became more of a personal goal if you will. Initially, it was simply to write a book. Can I do it? I did accomplish writing a book and my first book was, Invisible Paw Prints. That was my literary success. Then, I wanted to write a children’s book and the literary success took on a different meaning having worked on one book already and learning a great deal with self-publishing. Now, being armed with book writing experience, my literary success was to sell more books and see how reviews would provide me answers whether positive or negative in nature and reveal how well my hard work and dedication to the project was. So far, the book is receiving positive reviews to include a short review from a published author, Audrey Frank (Covered Glory).

Suzanne: What kind of research do you do, and how long do you spend researching before beginning a book?

Rob Kortus: I spend an enormous amount of time researching. I want to make sure there is not another book out there that matches my manuscript. Once I reach the conclusion that my idea is one, then the time comes to piece together the manuscript.

Suzanne: What do you feel is most important: characters, plot, or setting?

Rob Kortus: I believe all three are very important but if you were to ask me to choose one, it would be the characters in the book. I believe readers must be attracted to the characters because the characters drive the story. Like a great movie, the characters are in the driver’s seat and steer the audience throughout different settings and in the direction of the plot.

Suzanne: Describe your writing process and how you brainstorm ideas?

Rob Kortus: My writing process is to come up with a book idea simply by brainstorming and then build upon the idea. Most ideas for me are generated while driving my truck or riding my bicycle or even sitting in a quiet comfortable area with no distractions. Then it is a matter of sorting the ideas and piecing the ideas or puzzle together. Once that is completed, then it is off to the manuscript (with many fine-tuning revisions) where I will begin the fascinating journey of putting the story together. Once the manuscript is completed then with this particular book is finding an illustrator which isn’t easy. First, the illustrator has to fit my budget. Second, is to evaluate their work. Finally, generate a contract that is agreeable. As you can see in the book, I found a great illustrator (Jessica Warrick) who helped immensely to bring this book and the characters to life.

Suzanne: What’s next for you? Are you working on anything new at the present time?

Rob Kortus: When Dog Pals Fly Across America is just the first leg of Sophie’s, Sulley’s, and Wallace’s journey. I am working on the next series which will take the crew on a cross-country trip in Japan. My goal is to have the dog pals fly to every country in the world. That’s about 193 countries! You can follow along the progress of all books at my blog at www.whendogpalsfly.com and Facebook.

Suzanne: Thank you for agreeing to do this interview with me. I wish you much success with When Dog Pals Fly Across America!